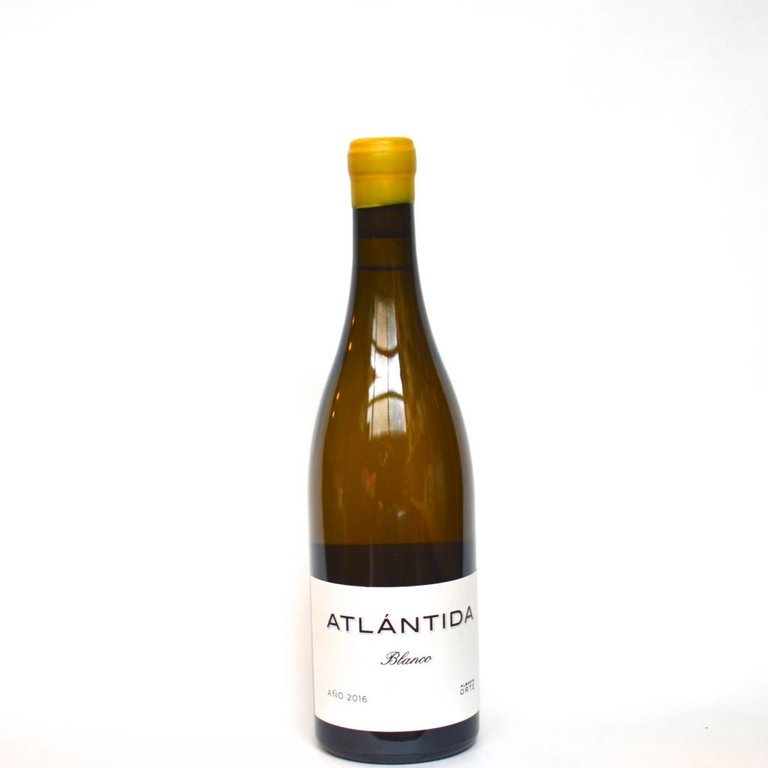 A complex, highly perfumed bouquet evokes orange blossom, fresh and dried stone fruits, confit of meyer lemon. On the palate, weighty and lifted all at once, with a startling confluence of mineral, savory and fruit flavors. Juicy tangerine and meyer lemon lead to a savory, floral mid palate, finishing with dusty mineral and a pronounced salinity, no doubt owing to its seaside provenance.

Atlántida Blanco’s combination of racy acidity and minerality with breadth and weight on the palate make it a beautiful match with richer seafood and poultry dishes. Grilled mackerel with olives and fresh herbs, or roasted oysters would be perfect pairs.

VFoot pigeage in stainless steel tanks and fermented in demi-muids using its own yeasts. Aged for 12 months in 600 L demi-muid with lees, no battonage. Racked to stainless steel for 5 months of stabilization before bottling.

The single parcel where the Atlántida is grown is called Pago Añina. Brushing against the sea, it is one of the Jerez’s most coastal vineyards, one with a pure white albariza soil. The grapes of this parcel were historically destined for Manzanilla and Fino due to their fresher maturation, lower alcohol and clean acidity. The unique albariza soil of this vineyard consists predominantly of chalk and clay, one of the richest raw materials within the vast vineyard of Spain, and suited perfectly for the climatic conditions of Cádiz. This dense soil retains an enormous amount of moisture from the heavy rainfalls (650 liters on average) in autumn and winter and later keeps the vines hydrated during the hot, arid summer months. The southern climate of Jerez is heavily influenced by the wind and by the sea. There are two dominant winds: the Levante and the Poniente, which are fundamental in the final period of grape maturation during the months of August and September when the fresh breeze off the water keeps the grapes cool and hydrated. This is also called the Rocío or Blandura, which is the rotation of the late summer, humid winds coming off the Atlantic that gives the grapes the necessary moisture to finish the maturation process.

About the producer
Alberto Orte, co-founder of Olé Imports, is a man of few words and great humility. This taciturn demeanor belies an acute intellect and profound talent for extrapolating what he has learned from history and making it new again. Nowhere is this more apparent than in the wines he makes, which are history projects unto themselves. Resurrecting extinct grape varieties and ancient techniques, and expressing the story of a place with authenticity and purity – this is his imprimatur. Atlántida Blanco is one such project, an homage to his homeland of Cádiz, using a grape that had not been seen in a century to craft a wine of unmistakable provenance. Balance, aromatic intensity and a direct line to terroir are his mission, and Atlántida Blanco exemplifies the focus of his talent. More than showing a piece of himself, Alberto prefers to let the sun and chalky soils of southern Spain speak for themselves, and with this wine, they do just that in great measure.