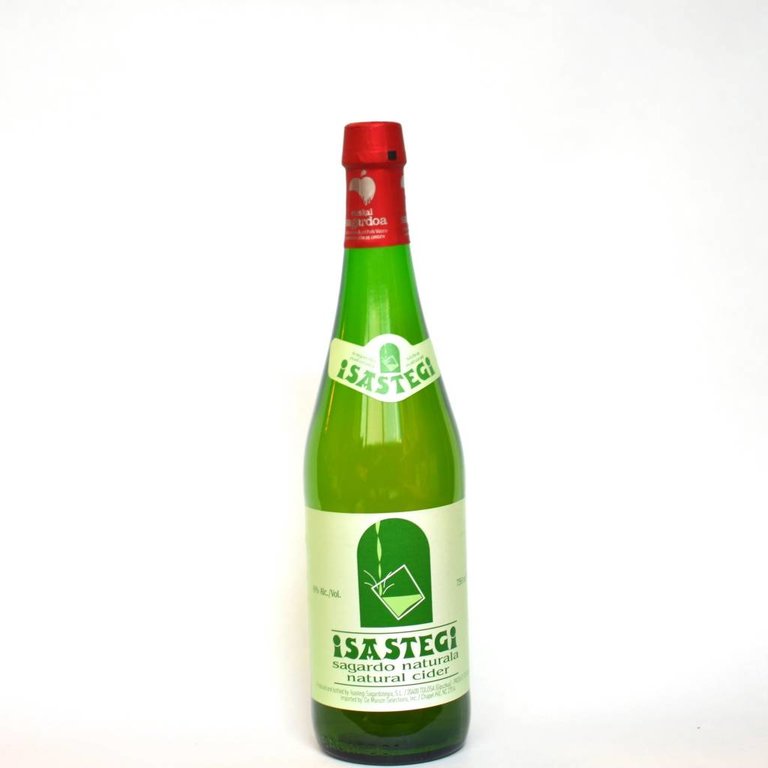 Sagardo naturala, or natural cider, has been produced in the Basque Country for over 2,000 years. According to Spanish law natural cider is produced using traditional methods without the addition of sugars or carbonic acid. The resulting cider is something unique to the Basque Country: it is still (with only mild residual carbonic acid) more bitter than most ciders and has an alcohol content that is typically between five and six percent by volume. The traditional production method starts with the apple harvest in the fall when apples of various native varieties are sorted, ground and pressed. The resulting juice is transferred into kupelas (large, oak barrels) and allowed to ferment until the spring, when it is bottled unfiltered.

Sagardo should be served cold in a wide glass and poured from great height to break up the residual carbonic gas. Only a small amount (one sip's worth) should be poured into the glass at a time.

The cider has a golden-green hue in the glass. Ripe notes of apple on the nose leads to an acidic, malted apple on the palate. The finish is crisp and fresh.

After fermentation in kupelas (old, large, oak cider barrels) the cider is bottled fresh and without filtration before each shipment.

Isastegi is an old family estate located in the town of Tolosa in the Basque Country of Spain. The estate was originally covered by pastures for cattle, with only a few apple trees for the family to make a small amount of cider for itself. In 1983 they decided to switch from livestock to cider output and started selling their cider to the public. Pastures were replaced by orchards and a small part of the house became dedicated to cider production. Over the years the demand for Isastegi cider has increased and the family’s country house has adapted to the changes. Recent renovations added new state-of-the-art pressing and bottling rooms as well as a larger space for the kupelas (old, large, oak cider barrels) and the txotx (spring tasting) season visitors. The folks at Isastegi pride themselves on their local focus, supplementing their own orchards’ yields by buying all the rest of the apples that are grown locally in Tolosa, and only resorting to using apples from Galicia and France during years with insufficient harvests. Every spring the people of Tolosa gather at Isastegi to celebrate txotx season by tasting the new vintage of cider while enjoying the traditional meal of cod omelets, fried cod and grilled steak.